Start-up Stories with The Wand Company 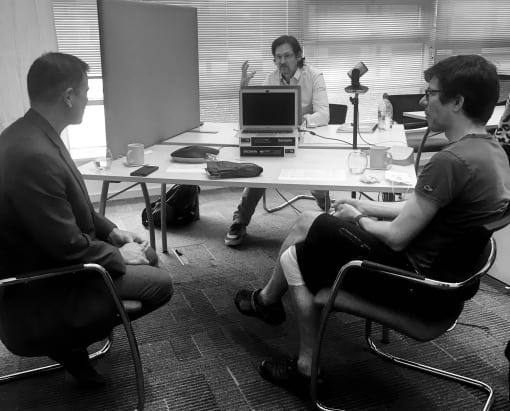 Founders of the The Wand Company, Richard Blakesley and Chris Barnardo recently took part in our Start-up Stories talk with Head of ideaSpace, Ben Hartley. They discussed their start-up journey, how they approach product design, what it’s really like to be on Dragon’s Den and the importance of good relationships – with each other, their customers and their supply chain.

How it all Started

The Wand Company, a business building detailed fantasy and science fiction replicas, was founded in 2009 by Richard and Chris. The pair initially met when they both worked at Cambridge Consultants and then started Pelikon, a company making displays. The idea to make The Wand Company’s first product, a working, gesture-based magic wand, was born from a children’s craft project. Chris took the idea to Richard who came up with how the internal electronics could work using an accelerometer, similar to those found in mobile phones. After making a prototype using the handle of a wooden spoon and scraping the money together for tooling from friends and family, the wand hit the market and sold as fast as they could make them. In the subsequent twelve years, they have made many more sci-fi and fantasy replicas which all bear The Wand Company stamp – exceptional quality and attention to detail.

You need mutual respect for each other.

The Key to a Successful Co-Founder Relationship is Trust

The success of The Wand Company is largely down to a particular dynamic between Richard and Chris. They both bring different but complementary personalities and skill sets to the table and their relationship is rooted in mutual trust and respect.

Chris - Even the first step in our journey was a joint coming together of two ways at looking at a problem – we almost approached it from opposite ends of the spectrum. Richard is much more methodical and I work more on a gut feeling about how design should be. But we’re both actually quite artistic in what we do and there’s a huge crossover between us. So we have skills that overlap, but we also each have a whole load outside of that. I’m very positive, I always see the upside of everything and I grossly underestimate the difficulty of doing a job – which are all good qualities for somebody who has to start something that everyone is telling you is impossible! I trust Richard with the company and with any of my decisions and to make the right one because they’re not motivated by personal aggrandisement – they are made completely for the benefit of both of us and the company. Even though sometimes, I might think his approach too cautious, and he might think ‘what the hell are you doing?!’. If I’d had someone like me (as a co-founder), we’d have gone bust straight away.

Richard - You need mutual respect for each other. If you had two personalities coming together that weren’t confident in each other, you could easily come unstuck.

The Devil is in the Detail

When it comes to product development, The Wand Company are uncompromising about quality and are passionate about adding details and functions to their products that create an unparalleled experience for the user. This is possible because of how they funded the company originally and have organised it since.

Chris - We make products that are very accurate and imbue them with functions that others haven’t. There’s a lot of creativity that can go into that. A lot of models out there don’t hit the mark – we decided to be different. We do almost everything internally. Richard was insistent we do all the software and hardware ourselves.

Richard - Because there’s no one stopping us – we’ve got no investors saying ‘no you can’t spend two hours talking about rivets’, we spend two hours talking about rivets. We do spend hours on tiny details. Some people say, ‘why are you wasting your time on that’ but many of our customers do really care about every rivet, every bolt, just the right shade of grey. It feels to us like the right thing to do.

Chris – One illustration of it being all about the details is the sonic screwdriver – which is basically a sci-fi wizard’s wand used by the Doctor in Doctor Who. When we made it we felt like it should somehow stay alive and awake when it was on display – so it was sort of sentient in its own way. Richard suggested it would be really cool if it spoke in morse code in some way. It was the eleventh Doctors sonic - so we made it beep eleven random different catch phrases in morse code. After one minute of it not being in use, it says hello in morse code, and as it was from the series which aired in 1963, there are 1963 seconds until it says something else. Also, we made the wand so it would be a prime number in millimetres in length – while each section of the wand is also a prime number in millimetres. It’s things like that.

The Reality of Dragon’s Den

After launching their initial wand, Richard and Chris appeared on Dragon’s Den in an attempt to raise some more capital and captured the attention, and offers of investment, from all five of the dragons.

Richard - There’s always a risk of it being a total car crash on Dragon’s Den. We realised it’s quite hard to control what’s going to happen. They intentionally try and throw you off balance and lob things at you – they ask you for numbers - and then more numbers.

Chris - We both went into it thinking, let’s try and control the narrative. So one of the things we did is research. I have no idea how people go on that program and get blindsided by questions they’re asked because so many questions they ask are asked so many times. It’s like going into an exam and not doing any prep. It’s only eight minutes on the telly but it’s three hours in reality. It went on and on. They tried to say the product didn’t work and did various things to throw us a bit. For anyone who’s interested, it appears like we took Duncan Bannatynes money - but we didn’t in the end and that was down to us. But I think it was a really good boost mentally and publicity wise.

The most important thing is to enjoy the journey, because if you only focus on the destination you’re really missing out.

Do Something You Enjoy

Chris and Richard’s approach to their business has always been motivated by enjoying the journey they’re on and doing it with integrity – not necessarily about the destination or hitting the big time.

Chris – It’s not about the money, money’s just a part of success. We all see the lottery winners in life. But the average person is grinding away doing their job. The main thing we decided to do was to do a job each day we enjoyed and to try and make products we like. The most important thing is to enjoy the journey, because if you only focus on the destination you’re really missing out. One example of that is with another company I had – the desination turned out to be very different than expected – and if I had ignored the journey I would have missed out on all the positive things along the way.

From Customers to Fans

Chris - We treat our fans well. Years later they can come to us about their product and we make a choice each time about whether we give them a new product or help them with the issue.

Richard - There are so few problems it’s not worth quibbling about. For us it’s a much more negative and draining process to get into a negative conversation with a customer. There’s a boost to everyone’s wellbeing from saying ‘yes we can help you’.

How to Stay Enthusiastic

After 12 years, Chris and Richard have maintained their enthusiasm for what they do.

Richard - If we hadn’t built good relationships with the people we’d had to work with – with the factories and the retailers – it would all be a bit of a grind. It feels like we’ve got this big family that we’ve built up. They really are more than business partners. We get huge hugs from the people we work with all around the world and that to me is what keeps me enthusiastic. There’s genuinely a warm bunch of people working together to make products, sell products and discuss new possibilities.

Chris - For me, it’s different to Richard, it’s a fear of failure. I don’t want to fail, I want to succeed. But there’s also the wonder in seeing our products come onto the market and interacting with customers on forums or when they write to us – I love that. Knowing that someone’s getting joy out of the products. That’s what keeps me enthusiastic.”

Find out more about The Wand Company

Knowing that someone’s getting joy out of the products. That’s what keeps me enthusiastic.

What we get asked the most…

Stay up to date with insights and events