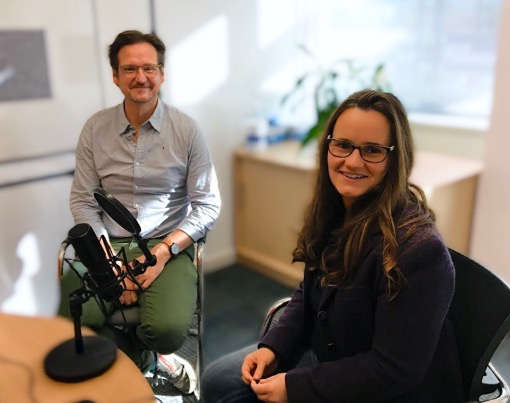 It was a delight to have Rosemary Francis as a guest on our Podcast recently. Rosemary is an expert on computer architecture, high-performance computing and analytics. She spent ten years building Ellexus, which was subsequently acquired by Altair, and now continues in a technical role as Chief Scientist within the HPC team where the Ellexus tools now reside. We've been incredibly fortunate to have had Rosemary on the Advisory Board of ideaSpace and also as an advisor for The Entrepreneurship Clinic - an ideaSpace event for new founders. Here's some of the highlights from her Start-up Story.

I often hear from entrepreneurs that they don't have mentors because they're not at that stage yet - such a false view. You need mentors of all sorts really early on, before you've come up with the idea. Find some friends who run businesses and they'll introduce you to their friends who run bigger businesses. That's what you need to do to start with. After that, everything else falls into place.

There are so many misses along the way, so many little failures and you've just got to keep on going and work through them

It’s all about networking. All of the further sales I made (after our first to ARM) was through networking - through going to events, working the room and making sure that by the end of a coffee break everyone in that room knew who I was and what our software did. Whenever possible I’d get as many business cards at the event so I could then chase people to set up meetings. In the beginning, even the wrong person at the right company was a great lead. And after a while, people started to know me in the industry.

Obviously, turning up at an event and have someone hand you their coffee cup because they’ve mistaken you for a waitress, was possibly a less enjoyable experience, but you've got to do it otherwise you never get anywhere. There are so many misses along the way, so many little failures but you've just got to keep on going and work through them.

Get feedback from your customers

Some of the best advice I got was to speak to the customer and ask them why they bought my software - to learn more about the problems that they were solving. Which was brilliant advice, because you've got to have a very clear idea on what your value proposition is - and the best person to tell you that is the person who's just bought your product. So they can tell you the pitch for your next customer.

But also, they'll tell you about other problems that they have. Our next product came directly from one of those conversations when visiting a customer. They happened to describe a problem they had and I was like, okay, let’s talk about that! Our next product really came out of a need to solve that problem. It was the second product that really accelerated our growth. The dual offering. It was a very powerful and useful product, and that's what put us on the road to serious growth.

Bootstrapping your business can give you more control and flexibility

I think there are some technologies where you do need to raise money, but for other companies, that's often a mistake. You lose control of your company - if you don't have a majority stake in your company, you can be fired. And I've seen a lot of people fired from the company that they founded, which is always a sad way to go.

And you’re also immediately on a treadmill of success. Once you've raised money, you have to deliver results. Whereas if you don't, it's really a question of staying alive until you do succeed! Which is another treadmill, but it's not quite the same. It's stressful enough having staff and customers without having investors as well. There are obvious companies that do need investment but there are others that could actually get to market without raising money. They could put together a minimum viable product and sell that, which is what I did. We got paid for our minimum viable product, which teaches you about what is useful and what isn't useful - and it keeps you focused.

I think ideaSpace is valuable as an organization because it's giving people the opportunity to surround themselves with like-minded people - people going through the same issues and problems. There’s peer support. You don't want to feel like you're the only one who's messing up and going through some kind of problem. And you realise that actually in the world of start-ups or any business, it's constant failures.

If you’re looking to be acquired, take record keeping seriously

I was very thorough when it came to keeping notes and records of NDA’s and contracts etc. I made sure my customers were signing license agreements with a sensible collection of terms in them. It meant that when we got to the due diligence part, it was quite straightforward. And when we got to building the data room and I was asked to present all my NDAs, I was like, sure! It was a quick copy and paste from Dropbox NDAs. It was close to being that simple. I feel very glad that we did that. I think next time around, I would put even more effort into keeping good archives and notes to make that process simple. It’s part of good business practice.

It also helps you with HR. It’s good to give people a proper employment contract. You're responsible for other people's lives. And I think you should take that seriously early on. A lot of people said to me during those early days - take HR seriously before you have to. And that was good advice. So all of that helps when it came to the point of being acquired.

Female founders are a minority, but things are changing

I think we still have a long way to go to break down the idea that tech businesses are still in some respects a male club that some women are allowed into. It’s a very subtle difference but the difference is there. I think it's illustrated best when you look at Thomas the Tank Engine - there are now female engines, but there are no male carriages. We do not have gender equality in Thomas the Tank Engine, and we don't have gender equality in the tech business.

We still have that barrier where you need to see yourself as a woman who can be in a male world. We have plenty of role models of women who are doing it, but it’s not an equal world yet. I think there’s a little way to go on that, but eventually – it will change.

When I've encountered problems and discrimination when starting my company, it's been born out of ignorance - not malicious intent. And most people, if they’ve behaved inappropriately, for example, given me the empty coffee cup at an event thinking I'm a waitress, it's just accidental. They’d be horrified if they knew!

I think the more we talk about it, the better it will become, and the easier it will be for girls to see themselves in those roles.

Look after your health

If I could go back to when I started Ellexus, I’d tell myself to take much better care of my health. When I started my company I was also working part time for somebody else and I slipped a disc in my back – mainly because I hadn't been exercising enough and looking after my core strength. Sitting at a desk is very bad for you and it's easy to let your health suffer.

I also did too many things when I was ill - I should have just stayed in bed and let that opportunity go. So now I'm older and things hurt more. I also have two children who bring home every lurgy under the sun. I now give myself a lot more time off to look after my health. You've got to focus on all of that, because when you’re feeling good and you're sleeping okay, then you can be effective at work.

But you won’t be effective at work if you run yourself into the ground. I think people say it's a marathon, not a sprint. And that's very important to remember.

You've got to focus on your health, because once you're doing that and you're sleeping okay, then you can be effective at work

What we get asked the most…

Stay up to date with insights and events